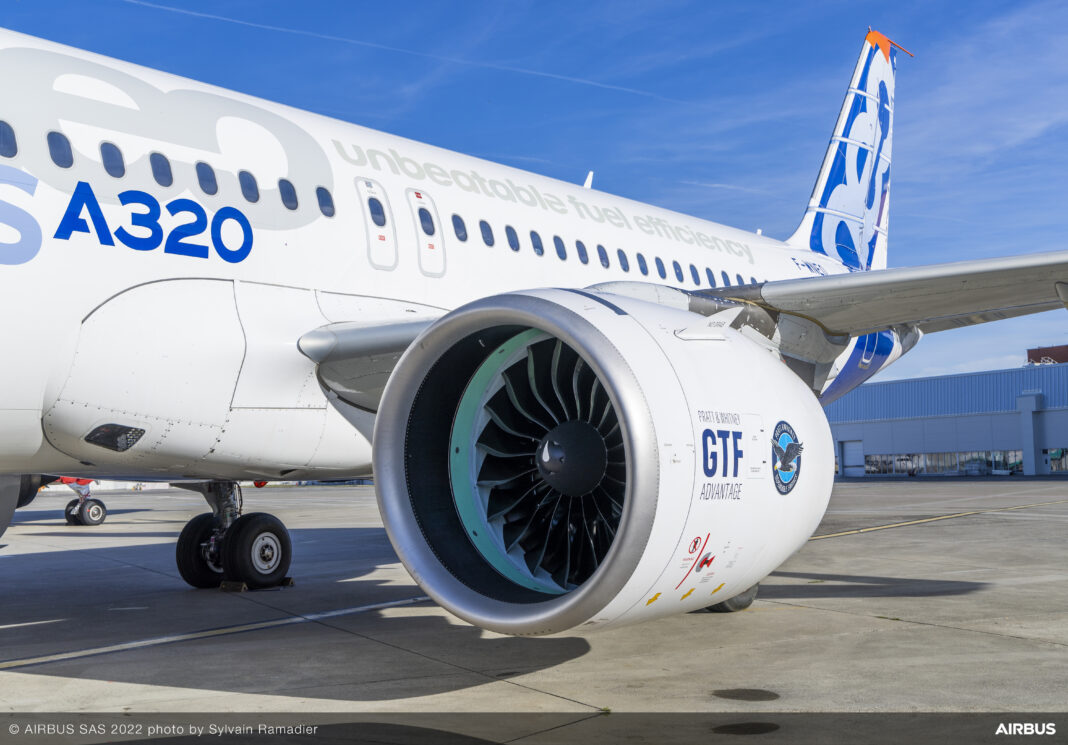 Airbus has started development flight testing of the Pratt & Whitney GTF Advantage engine on an A320neo aircraft. This early flight test campaign will continue to mature the engine by testing it in a variety of environments, including hot and cold weather and operation from high-altitude airports.

The flight test campaign is an extension of ongoing product development by Pratt & Whitney and Airbus. Engine certification will continue through the first half of 2023, including flights currently underway on the Pratt & Whitney flying test bed in Mirabel, Québec, Canada, as well as extensive endurance testing to ensure product maturity at entry into service. The engine has completed more than 2,400 hours and 7,800 cycles of testing, including a successful test on 100% sustainable aviation fuel (SAF).

“GTF engines already offer the lowest fuel consumption and CO2 emissions for the A320neo family,” said Rick Deurloo, president of Commercial Engines at Pratt & Whitney. “The GTF Advantage engine extends that lead. It also enhances aircraft capability by increasing thrust and protects durability by running cooler. For airlines, this means new revenue opportunities and better operating economics. Our revolutionary geared fan architecture is the foundation for more sustainable aviation technologies in the decades ahead, and the GTF Advantage engine is the next step in that journey.”

The GTF Advantage engine lowers fuel consumption and CO2 emissions by up to 1% compared to the current model GTF engine. Capable of a takeoff thrust improvement of 4% at sea level, the engine could enable longer range and higher payload, making it particularly suitable for A321XLR aircraft and unlocking more destinations for airlines. In addition, the engine will offer an increase of up to 8% takeoff thrust at higher altitudes. GTF Advantage will be intermixable and interchangeable with the current GTF engine to ensure maximum operational flexibility.

The Pratt & Whitney GTF™ engine with Collins Aerospace nacelle is the only geared propulsion system delivering industry-leading sustainability benefits and dependable, world-class operating costs. GTF-powered aircraft reduce fuel consumption and CO2 emissions by 16% to 20%, NOx emissions by up to 50% and noise footprint by up to 75%.* Certified for operation on 50% SAF and successfully tested on 100% SAF, the engines are capable of further reductions in carbon emissions, which will help the aviation industry meet its goal of net zero emissions by 2050.